Do any of you have a vacation that will fit my 80 sr sport coupe?
Top

80Corollin wrote:Do any of you have a vacation that will fit my 80 sr sport coupe? If they don´t have classic Toyota´s in heaven.. I´M NOT GOING!!!
Top

Reviving a dead thread but since it's stickied who cares.

That's actually a JDM 4 door Te71 sprinter, which you can tell by the notch up at the rear pillar compared to a normal sedan. Here is an article on them: http://80shero.blogspot.co.nz/2015/08/t ... -tree.html They also have different headlights and grilles to any of the other ke-series sedans. The one in your picture looks to be of a later vintage than the one in the article, probably post 1984 seeing as it looks to have the ke-series "slant front" that is more common in Australia and New Zealand. That is why the taillights are probably different compared to the article.

Anyway, on to why I'm really posting here. I have a ke70 wagon in New Zealand and am looking for some USDM-spec chrome taillights like these:

I've got the shitty non-bordered ones and am looking to replace. It appears these taillights were only on the 1980 model 1.8 litre wagons there in the US but I am not sure, since I don't actually live in there. If anyone knows of any of these models at wreckers or something I would love to buy the taillights. Also after the chrome rear latch if anyone knows of them.

reviving the revived thread...
you could also use the early style wagon tail (twin round headlight and small square sunken headlight) and use chrome vinyl over the black surrounds?

The purpose of this thread was to find out interchangeability yeah? yet has there been confirmation of what fits what? Or just a lot of pictures. I tried liftback and hardtop tails in my coupe with no luck and assumed they just don't interchange. Or is there in fact some interchangeability?

Is it correct to say, with the exception of the sprinter sedan, a tail light from a particular body style will bolt into another same body style regardless of corolla or sprinter or early/facelift. But will not fit another body style. ie a coupe tail will fit another coupe, but not a sedan/liftback or hardtop. not including modification because anything is then possible.
And... for each body style, there are at least 4 different tail lights. A corolla and a sprinter version and then an early and a facelift of each. then there's painted or chromed variants in some of them. and what about 2door sedan, are they same bolt pattern as the 4door?
Top

AE25 wrote:
The purpose of this thread was to find out interchangeability yeah? yet has there been confirmation of what fits what? Or just a lot of pictures. I tried liftback and hardtop tails in my coupe with no luck and assumed they just don't interchange. Or is there in fact some interchangeability?


Coupe is exceptional the others won't work , only the ribbed levin will work,
The day we learn to think
Top

do you mean levin and trueno 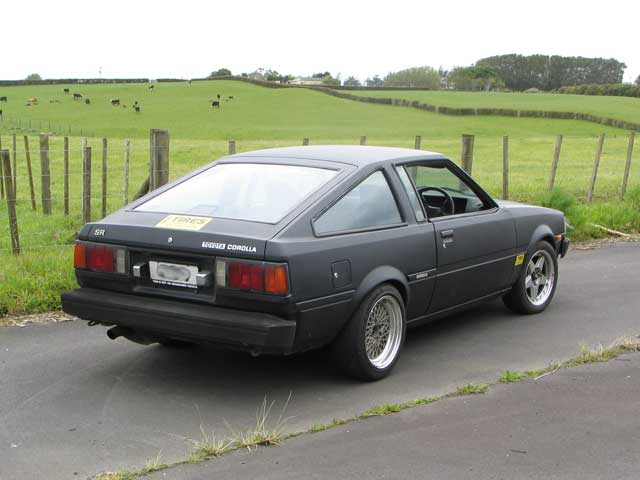 Ok i didnt know
The day we learn to think
Top

Some years before I have made a conversion between TE71 Coupe front and rear lights.
Including Zenki and Kouki Toyota Sprinter Trueno-s, and Corolla Levins.

Looking for rear lights , 1981 coupe/fastback ,TE71/TE72 , I’m overwhelmed on how many models names they carry lol , going crazy on eBay looking
I can’t up load a pic of my rear
Top
Post Reply
21 posts